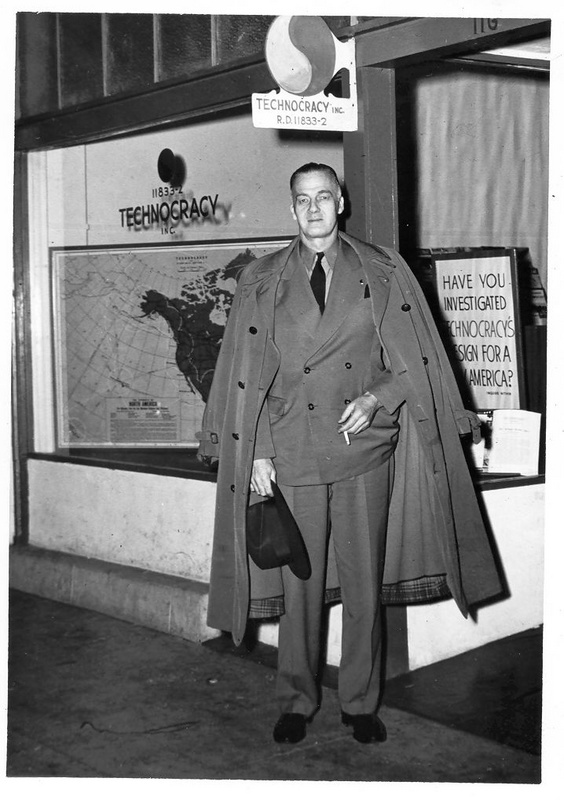 The history and goals of Technocracy Incorporated should be known by those interested in the life and works of R. Buckminster Fuller. Sometimes Technocracy and Fuller influenced each other, sometimes they were at odds, but knowledge of the former is necessary for understanding the latter.

Technocracy Incorporated was the organization Scott founded to promote and implement the creation of a North American Technate. The Technate is a corporation located in what is now the North American continent. Nearly all the resources required for self-perpetuation are to be found on or around this land mass, thus no further territory is required. While all are welcome to study and promote Technocracy, Technocracy Incorporated has been explicit from its founding that they have no theory of an assumption to power, nor will they accept any political means of advancement. The Technate will occur, but in its own time and through mass support. Fuller often spoke of the means for global utopia being at hand, were the resources of the world re-directed from weaponry to ‘livingry.’ Technocracy is dead-set against the price system, Fuller was dead-set against capitalism. Fuller was explicit from the late 1920s onward that he had no interest in holding political office, being imitated or starting a cult. His life experiment was a one-man show.

Technocracy Incorporated holds that the true value of any good or service is to be found in the amount of electricity required to produce and distribute it. Any other valuation is a means of social control, keeping a few wealthy and most poor. By the implementation of the Technate, goods and services could be produced and distributed according to need rather than money. Fuller spoke of the wealth of a body of people in terms of ‘energy slaves,’ or how much electricity that body of people produced and consumed. By the creation of a global energy grid, the horsepower of those energy slaves could be distributed as needed rather than as purchased.

It goes without saying that, in accordance with our criterion of least energy cost, the cars would be really streamlined, which would require that the engine be placed in the rear rather than in the front; they would be powered with the most efficient power unit that could be devised.

Technocracy Incorporated views housing as a basic human need with objective solutions - the objective solution of efficiency and production for function rather than profit. The following could have come from Fuller’s own pen:

So great is the edict of habit on the human animal that it becomes almost impossible for one to detach himself sufficiently to take an objective view of the subject of housing. Our houses, and our buildings and structures generally, resemble our clothing in that they attain a certain convention and thereafter we tend to accept them without further question. It never occurs to us to ask whether the prevailing convention is better or worse than other possible styles. The training of our architects is such as to tend to perpetuate this state of affairs. Aside from draftsmanship and a small amount of elementary training in strength of materials and other structural detail, our students of architecture spend most of their time studying the architectural details of the ceremonial buildings of the past-temples, cathedrals, palaces and the like. This accounts for the fact that power plants are seen with Corinthian columns, banks with Gothic windows, and libraries resembling Greek temples. The problem of designing buildings in accordance with the functions they are to perform seems rarely to have occurred to architects.

The successful architect of today is either one who has developed an architectural firm that receives commissions for designing large and expensive buildings, such as skyscrapers, hospitals, courthouses, and the like, or else an individual practitioner who knows sufficiently well the pecuniary canon of good taste to receive commissions for the design of residence in the expensive residential sections of our cities and their suburbs.

Technocracy Incorporated has consistently refrained from supporting or attacking any other thinker or school of thought. At least by name…

If an architect wishes to be really “modern,” he then proceeds to do something “different.” He designs houses made completely of glass or metal, and hung from a post. The two basic questions that seem never to occur in connection with these endeavors are: ‘What is the building for?’ and ‘Would it be practicable to house the inhabitants of an entire continent in such structures?’

Here Technocracy Inc. gives a clear elbow to the ribs of Fuller, whose 4D House of 1927 was to be made of metal and suspended from a pole.

Membership in Technocracy Inc. has waxed and waned but in no way is the organization a thing of the past. Interest in Technocracy was greatest during a time of profound economic crisis in North America. As North America experiences a new low point in its fortunes, people are searching for new solutions to the old problems of economic disparity, waste of resources and political corruption. Only one man - R. Buckminster Fuller - could be Bucky. Technocracy Inc. is approaching its first century of activity, and membership is open.

Trevor Blake is the author of the Buckminster Fuller Bibliography, available at synchronofile.com.